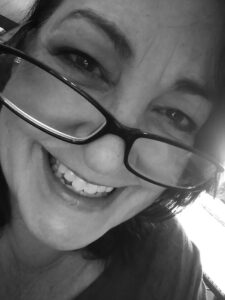 The day after Mother’s Day 2018 my 92-year-old mother decided to tell me a secret she had withheld from me my entire 54 years on this planet. That I was adopted. That my sister Betsy who is 2 years older than me was also adopted. That I was not a blood relative to anyone I called family. In those first few moments of truth, parts deep inside me aligned for the first time in my life.  I knew this was true. I felt it… and I was silently excited, even though I could not define why.

My husband didn’t believe her, and with good reason.  Mom had been living with us and our two daughters for 11 years. She was almost totally blind, almost totally deaf, and well into her third year of dementia. She had been having auditory delusions for quite a while, and since the hospice care had moved in the hospital bed, she had been having visual delusions – including the faces of little babies.

However, one phone call to my cousin confirmed that he and the rest of the family had known of our adoptions our entire lives but had never said anything out of love for our mother, respecting her wishes to “protect” us. Later he explained his answers to my questions about my deceased father were vague because he was trying to keep The Secret. Mom said she never told our step-father who had debilitating strokes shortly after they were married. I’ll never know since he passed a couple of years before Mom came to live with us.

For a few days pondering my existence, I sorted what I knew and what I didn’t know.  I was 54 years old, married to my favorite man, the mother of 2 young teenage daughters. I knew who I was, didn’t I? I began to realize that I was more than I had ever known!  I wanted answers! I wanted to know the whole truth, the rest of the story, all of the details! I wanted to know the adventure my God had planned for me before I was even born!

Sadly, my mother had purged most of her old papers, saying at the time she didn’t want to leave so much stuff for us to clean up.  Later she said she had been, “eliminating any evidence that anyone might find that we were not really hers.” All of this was to keep harm or prejudice or limits away from us. All I knew was that I was born in Pennsylvania and came to her based on a friend’s recommendation.

Always my champion, my husband found online that just in the previous year (2017), Pennsylvania had opened access to adoptees for their original birth certificates. Once I shared the news with my life sister, who was living in Virginia, our searches began. My sister went first, as usual, sending in her application right away. She emailed me the form, and I eventually followed her lead.

By the time my sister and niece visited for Mom’s 93rd birthday in July, Betsy had received her original birth certificate. Again, unbeknownst to Mom, we joined Ancestry.com and ordered DNA testing kits.  Although Mom could not understand why we needed another mother, we did discuss some things with her – like Betsy came from an agency and I came through lawyers.  I didn’t feel the anger my sister felt, at least not right away.  I felt relief that we had not had any major medical issues with our children, and relief that my differences from my sister were not unusual – mostly in our physical structures – she was short, I was tall; she developed early, I was a late bloomer; her teeth were pretty straight, my teeth required years of braces to become straight (thank you Mom); she had beautiful, round dark brown eyes – I had almond-shaped, heavily-lidded hazel eyes.

Although my sister sent her DNA in right away when she got home, I was not ready. Before Mom passed in September, I had received my original birth certificate and knew the name and age of my birth mother. The father’s information was blank. My searches on Ancestry revealed about 40,000 women with my birth mother’s name! I sent in my DNA.

After my DNA results came in, the weeks blurred together with searches through my matches of names, locations, birthdates, marriage certificates, obituaries, and overwhelming emotions. I hesitantly picked out a person matching the name on my original birth certificate, but she had passed. Betsy told me she had joined a page on Facebook called Adoption-Search and Reunion. She had connected with three “Search Angels” who were helping her sort out her details and search for her biological parents. They were amazing, she told me, and had recommended she email her highest DNA matches. So, I tried it.

One day in November a second cousin match emailed me to ask if I recognized some of his family names. I did not. I asked if he had heard of my birth mother’s name. His answer changed my life forever – yes, it was his aunt living in California with her two daughters! I messaged one sister through Facebook and she wrote back, “We’ve always wanted to find you!” That day I spoke with my “halflings” – my two new sisters in California. Later we all had a conference call including my 3rd halfling sister living in Pennsylvania and my birth mother.  When I heard my birth mother’s voice, I suddenly had no words! I could barely breathe! Her voice was deeply familiar, somehow, reaching into me in places where no one else could. From that day, all of our conversations were crazy fun and wonderful as we discovered how much we all had in common and compared the timelines of our lives.

The holidays that year were wonderful and weird – not that weird was unfamiliar to me, but I have never been so empty from loss and full of joy at the same time! We were desperate to get together in person – to somehow make this real. On Valentine’s Day 2019, I arrived in California. I met my sweet and sassy birth mother and hugged all three of my new sisters in my arms. I spent four amazing days with them and their families, other relatives – including that second cousin match who started it all – and friends. I don’t think I slept more than a couple of hours! To top it all off, we had a birthday party! I learned a new way to celebrate LOVE on Valentine’s Day. I feel completely and specifically BLESSED!

After returning home, I found myself looking for my birth father, who had not ever been told about me. I realized I had lucked out with my second cousin. My paternity was way more complicated. On the Friday of Mother’s Day weekend 2019, I connected with the “Search Angels” who were helping my life sister. They jumped on the mystery immediately, teaching me how to search, what centimorgans are, other websites to upload my DNA, and encouraging me to be brave the entire time. I think they knew about the sadness and pining of little 8-year-old me, who always wanted a father and a pony. They were brilliant.

They drew close to one man, all of the evidence indicated he was my biological father. One of my DNA matches who had an extensive family tree refused to disclose information. They assured me they could navigate without that information – and they DID!! Monday, the day after Mother’s Day, one year to the DAY I had been told I was adopted, I was dialing the phone number of the man who was probably my biological father.

My Search Angels prepared me with words to use, as I was calling his work. He was not there, so I left a message which danced around DNA research. When he called me back, despite my Search Angels’ best efforts, I once again found words hard to find, especially without breath! We talked and he was nice. He had a sense of humor, disarming my anxiety.  He was willing to believe me!

Once he was sure, we started texting. He texted me every day. He called me pet names like Sweetheart, Dear, Honey.  He had two sons; the eldest owned the business with him. I found out he was a widower, but he and his wife had been horseback riders. He became my Cowboy! I had wanted a father for so long, I was terrified. This was too good to be true! I had a huge list of “what ifs” and had myself spinning like a tornado.

Again, my Search Angels stepped up, reminding me to be brave and grateful. The alternatives would only lead to regrets of missed adventures.  After one deep breath, I banished my doubts about my Cowboy! I reminded myself I trusted that all of this was a gift from my God.  I gave myself permission to be HAPPY about this man! To date, we have not seen each other in person due to health issues and COVID restrictions, but we have promised to hug each other for real as soon as we can make it.

Just as I questioned and mourned so many of my days after I found out “The Secret”, I have the perfect balm to pour over each new day. My journey is beautiful and wonderous – an adventure expanding my connection in this life and filling me with joy and gratitude.